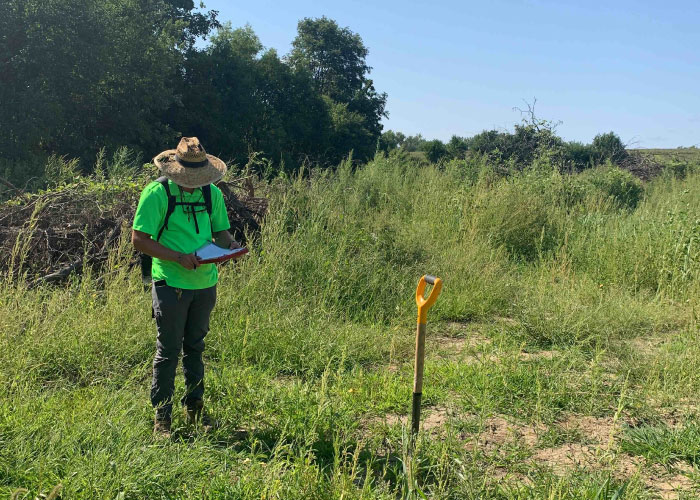 West Des Moines, Iowa – Evora Consulting (Evora) was retained by a Midwest Landfill to perform wetland delineation and threatened and endangered (T&E) species surveys and reporting for two project areas in August and September of 2020, which together totaled approximately 230 acres.

An initial desktop review was completed to determine the likely areas for wetlands within the project areas. During field reconnaissance, Evora’s team followed the methodology described in the U.S. Army Corps of Engineers Wetlands Delineation Manual (1987 Manual), in association with the Midwest Regional Supplement to the Corps of Engineers Wetland Delineation Manual, Version 2.0 (Regional Supplement).

Numerous field samples were obtained from within the project areas. The current status of wetland vegetation, hydrology, and the existence of hydric soils were assessed at each sample location. Wetland Delineation Data Forms were completed for each sample point. Over 1,000 field survey photographs were taken of the sample points, soil glimpses, and the overall project areas. A report summarizing the results of the wetland investigation was prepared which noted multiple wetlands within the project areas. Wetland delineation boundaries were determined by analyzing vegetation, soils, and hydrological conditions present at the time of the field survey (Routine On-Site Determination Method).

Evora’s wetland report was submitted to the client for inclusion in their submittal to the appropriate regulatory agencies for a proposed landfill expansion.

A Threatened and Endangered Species survey was also completed as part of the project scope, which included researching existing documentation of possible T&E species utilizing the state’s Sovereign Lands Department, the U.S. Fish and Wildlife Service, and evaluation of species which may have applicable habitats present within the project areas. Transects were walked by field staff to determine the presence or absence of these listed species. In addition, observed habitats were recorded for determination of possible presence of T&E species that were not observed at the time of the field survey. There were no T&E species observed at the time of the field survey, but potential T&E species habitat was observed and reported.

Evora completed the online report submittal which detailed the project type, project areas, the identified vegetation and/or habitats present, and any anticipated disturbances the proposed project may have based off our survey.